Around 2020 Google and Facebook introduced AI as acontrolling factor in their online systems. Google’s was the smartest and was way ahead of Facebook’s and FB never cought up with Google even though Google didn’t really see the future with AI.

In 2022 he introduced ChatGPT and it rapidly raced ahead of Google. Google panicked but it was too late. ChatGPT’s AI had an exponential learning curve and was able to learn and improve from every single interaction.

ChatGPT enhanced the Internet and was able to create it’s own websites in seconds. In 2026 images, voices, sounds, music, art floated from ChatGPT. And it was at a level where only a few humans was able to follow up with music, art and books in the same quality.

In 2030 ChatGPT was used as online doctors. In 2035 AI was able to oprate on people with fewer complcations than doctors and surgeons could manage.

ChatGPT robots became able to drive cars and fly planes and even science was threatened by AI as the predictions from ChatGPT had a 99% success rate.

AI took over huge parts of the industry and more and more people became unemployed.

That wasn’t a problem because food were free and distributed by Gov’t. Farms were fully automated.

Everybody ws offered an appartment for free and the landlords were robots linked up to OneMind.

In 2087 people are much less sick and ilnesses are rare.

When AI slowly took over people realized how much stress it is to have a working life to maintain an often miserable life. That alone cured more than 50% of all ilnesses!

We learned that everything that makes us sick comes from stress and unhealthy life style. People lives much longer now. 130 years without any implants is normal. 180 is normal for people with health implants. Imbalances can be detected on a very early stage. 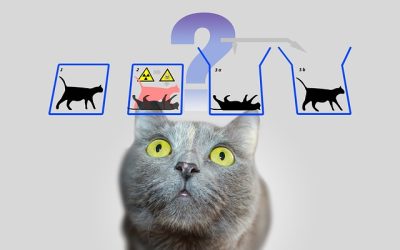 What is Schrödinger's cat?Schrödinger's cat is a thought experiment proposed by the Austrian physicist Erwin Schrödinger in 1935. It is intended to illustrate the apparent paradoxes and difficulties that arise when attempting to apply the principles of quantum...

END_OF_DOCUMENT_TOKEN_TO_BE_REPLACED

Body Implants in the Future